In 1993, the California Milk Processor Board got together under the direction of Goodby Silverstein & Partners and spawned the genius catch phrase “got milk?®”. If you pay attention, you’ll notice that they still use that tagline today (and it’s a vibrant campaign on many levels, as you can see at their website and at their trade and consumer site). Truly, one of the best.

You can tell how deeply that phrase has set in to our subconscious just by noticing how often it’s ripped off (some may say parodied). Look around over the next few weeks, and you’ll quickly realize this campaign’s tagline has been raped and pillaged. In fact, it’s probably one of the most stolen pieces of intellectual property ever. Flattering for sure…but there’s more to it in my eyes. Let me share.

First, I need to bring some credibility to the claim. Below is a list of abuses that I have been keeping on a notepad on my desk for well over a year–I just knew that one day I would decide to share this pet peeve of mine!

How many more will YOU find once you start looking? Please share.

Got faith?
Got water?
Got mold?
Got gas?
Got truth?
Got voter ID?
Got pain?
Got remodeling?
Got music?
Got art?
Got rot?
Got mulch?
Got excelsior?
Got democracy?In 2004, the slogan was imitated by artist David Rosen, with popular political design “Got Democracy?” in reaction to the Iraq war; it was featured on the cover of Boston Magazine that July. 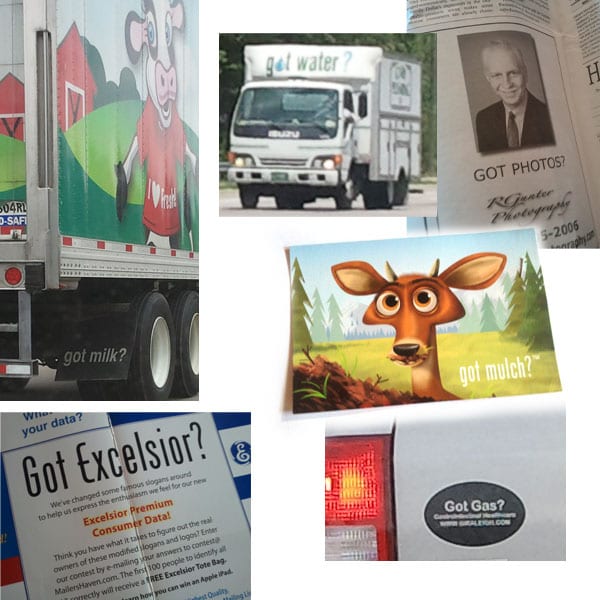 Personally, I am fascinated with the art of company identity, branding and messaging because that’s what I do for a living. So, in all fairness, I assume I pay more attention to these things than the average Joe.

But my problem isn’t so much about the stealing of others’ creativity, because that happens all the time in marketing, in music and beyond–sometimes it’s innocent and through osmosis, but in other instances, it’s just a blatant rip-off. No, what really bothers me is the utter laziness it illustrates.

The irony of this sort of copycat tactic is that the person who decides to use such a phrase obviously was stimulated by the original message, so he/she recognizes that the creativity in the original is powerful. Then, in the same moment, they’ve chosen to ignore the founding element that made it work: It was original!

My advice is simple: Make an attempt to be original. If you’re not “a creative” by nature, hire someone who is. In doing so, you’ll be rewarded. You see, as humans, we’re fascinated by what we’ve never seen. Or by being prompted to think a new thought. We’re stimulated by those who stimulate us. Give a little creative nugget to the world and they will reward you in some equal manner.

Beyond advertising, you can easily see creative appreciation just by visiting YouTube and noticing the amount of views on many ORIGINAL videos. Or, when you see amazing photography that takes people’s breath away. But within advertising, it takes place in campaign concepting, graphic design and especially in creative copywriting.

In this boxed-up, sanitized, packaged and optimized world we live in, let us not forget that creativity is what separates us from lesser species, and one of the purist ways to show that the human spirit is alive and well.

The Different Types of Logo Designs: Which One is the Best for Your Brand?

A logo is more than just the visual representation of your organization. It’s a meaningful…

Selecting the Best Type of Email for Your Business

The Top 3 Essentials for a Good Logo

Logos are everywhere—you probably see more logos than ads each day, or over 6,000 a…